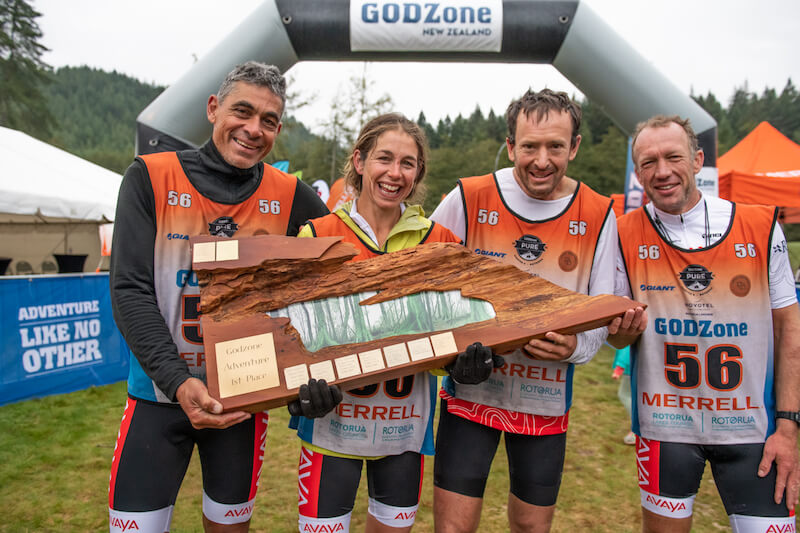 Nathan Fa’avae, Chris Forne, Sophie Hart, and Stu Lynch of team Avaya clocked up their fifth win of the world’s largest expedition adventure race this morning when they pedalled across the GODZone finish line.

The foursome arrived at Waipa Hub in the Redwoods forest south of Rotorua at 7.55 am, after five days of adventure racing across 666km of some of New Zealand’s most diverse wilderness terrain. The intensity of what the team had achieved was not lost on Avaya captain Nathan Fa’avae.

“The start of the race was a bit interesting because of Covid level 2 teams were set off in intervals, and we were in the last wave. We just did our own thing on that first bike stage and were quite surprised to reach the front of the field pretty quickly.”

“I guess that was a promising sign early on that we were not even trying to catch up. From there on, we were consistently moving pretty quickly through most of the disciplines, which got us into an excellent position to really try and break from the front pack as early as possible.”

The world-class team has an impeccable track record at GODZone, winning every chapter they have raced in together. This includes Chapter 1 -Milford Sound, Chapter 2 – Mt Cook, Chapter 3 – Kaikoura, Chapter 4 – Wanaka, and Chapter 9 – Rotorua.

Chris Forne has won an additional three GODZone’s racing as the captain of other teams, including Chapter 5 Tasman, Chapter 7 Fiordland, and Chapter 8 in Canterbury.

” Avaya is world-class in every sense and the true champions of the adventure racing world. They don’t give anything away to the other teams and consistently race their own race. Over the years, they have set a very high standard of racing that no other team has come close to matching. It’s a privilege to watch this team come back together and win GODZone again, especially at the very first North Island GODZone.”

A crowd of well-wishers met the winning team at the GODZone finish line this morning, including Rotorua Mayor Steve Chadwick and Rotorua Deputy Mayor Dave Donaldson.

Meanwhile, a classic battle is taking place between Richie McCaw’s team iSport and Queenstown’s Tiki Tour team for 2nd and 3rd. Both teams have been neck and neck throughout the adventure race, with McCaw’s team first off the 53km Lake Taupo kayak stage this morning.

“This will come down to who has the most horsepower and desire to take the second spot,” says Fair maid. “ Both have raced well and given it everything. There are quite a few checkpoints on the Lake Ohakuri stage between Taupo and the finish line, which could be tricky when travelling in a packraft. Any mistakes there would be costly at this stage of the game.”

GODZONE CHAPTER 9 KEY INFO
Race Dates: Friday, March 5th – Sunday, March 14th
What: The world’s largest expedition adventure race held for the first time in the North Island, New Zealand. Teams will race over an unknown course over eight days across the wider Rotorua /BOP district.
Length of race: GZ PURE teams will experience roughly 365km of mountain biking, 140km of paddling, and 190km of trekking in total.
Course & Maps: GODZone teams use various disciplines such as pack rafting, trekking, mountain biking, mountain trekking to go from point to point through the course. The course is open 24 hours, and competitors will race day and night, stopping at transition areas to change disciplines and pick up equipment.
GPS Tracking: All teams are required to carry a GPS tracking system (yellow brick) at all times while on the course. Media can follow their progress on our live site at http://www.godzoneadventure.com.
Media Output: Video clips, high-resolution images, and VNR’s sent out daily.
Facebook: http://www.facebook.com/godzoneadventure
Instagram: https://www.instagram.com/godzonepure