Three time defending champions Seagate, led by Nathan Fa’avae, have not blinked as they race into day three of the GODZone adventure race.

Overnight the leading team managed to hold their first place ranking as they tackled the Criffel Peak and Pisa mountain ranges towards the Kawarau River. Despite team member Chris Forne’s sore knee, they steadily continued their domination of the GODZone adventure race and are now kayaking towards Kingston on Stage 5 of the event.

“ It was good to get some sleep last night just passed the Meg Hut and it was pretty cold up there on the tops,” said Nathan Fa’avae as the team arrived into the transition to the kayak.

There was mist and wind and  the whole team benefited from dropping down and having a good sleep.”

Behind them, the gap is rapidly closing with second position being taken overnight by  the world ranked number one team Vidaraid from Brazil and Spain. They managed to pass  Queenstown team Swordfox on the mountain bike stage.

“We have a real race on at the front end now and for the first time ever in GODZone its looking like Seagate are really going to be pushed and pursued as we enter the second half of the course,” says Race Director Warren Bates.

Whether Vidaraid will get in front of Seagate is the question but if they do its going to be a major battle of wills to the bitter end and will make for some exciting times ahead.”

As the course widens across the regions and heads south towards Kingston the field of over 50 remaining teams will  increasingly spread with the back teams up to two days behind the leaders.  Many of the mid placed teams are currently on the coasteering section on Lake Wanaka and riding along the Dampner Bay track towards the township.

“ It’s a decent sized mountain bike rising to 1963m on Mt Pisa, the highest point we have ever gone to on the GODZone so the chasing teams in the top ten placings are really going to feel it today,” says Bates.

While Team Seagate took their first hours sleep of the race overnight Vidaraid did not.

“ There is a lot of strategy at play right now with these top three teams and Seagate will smoke this paddle – they are champion kayakers.

But Vidaraid are going to have to sleep at some stage so does that mean Swordfox could get back in front of them and regain second place. They are hanging in there and its sill anyone’s game to win,” says Bates.
For more information go to http://godzoneadventure.com  or the Facebook page http://www.facebook.com/godzoneadventure 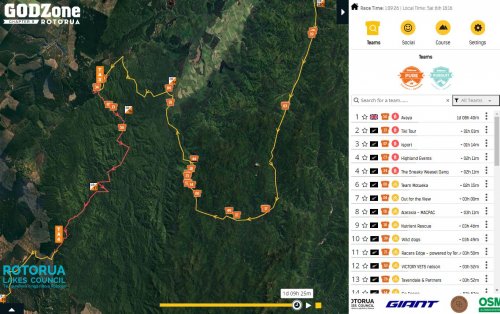