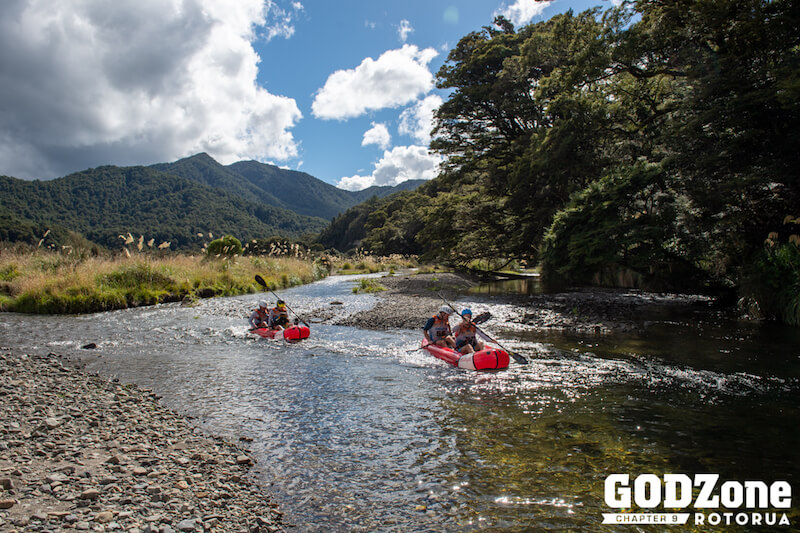 A WAR OF ATTRITION

“From now it will be a war of attrition” are the famous last words from Race Director Adam Fairmaid this morning as GODZone Chapter 9 moves into the most challenging half of the race.

With teams spread far and wide across the 666km course, the mood will change significantly today as front runners tackle the most extensive and gruntiest trek of the course – a full traverse of the mighty Kaweka and Kaimanawa ranges – while the rest of the field peruse 55km of the mighty Mohaka River in their packrafts.

“It’s going to be a long hard walk over this trek as the teams head to around 6000m of vertical ascent – pretty spectacular country in there and one of my favourite places in New Zealand,” says Fairmaid. “The teams have already done a good amount of trekking in this race so far, and there will be some sore feet already. Whoever looks after their feet should be ok, but this trek will sort the wheat from chaff over the next 24 hours.”

Lead team Avaya smoked the Mohaka packraft last night despite telling TA staff they expected to stop and sleep somewhere and the AR champion team is already high up into the Kaweka mountain range this morning.

” This is the definitive break in the race, and it would take something serious happening for another team to catch them now, says Fairmaid. ” They trekked up to Middle Hill Hut and had 4 hours sleep and are now already up on the tops having made it to Whetu – the highest point – and would have had an amazing sunrise up there this morning.”

He says it’s a pretty fantastic performance, and he did not expect them to get off the river last night with the dark zone.

” We had safety guys on the rapids at the top of the Mohaka river yesterday, and they watched Avaya come to the first big rapid and bowl through it – no hesitation. It looks like they might have jogged the last hour of this stage – there is a track to the true right of the river at Te Puia Hut – and I think they intended to make this powerful break from the rest of the chasing teams.”

Behind them on the Mohaka River is a hungry chasing pack of 4 or 5 teams all juggling for a position today. The river will be a blessing for strong paddlers and a relief for others to be finally off their feet.

” Tiki Tour spend longer sleeping overnight but have now gunned it this morning – they will be feeling good and ready to push into this nails part of the course.”

“Racers Edge with captain Richard Anderson are starting to shine bit – showing an old head making good decisions. They have been patient and let a few teams get in front of them and are now starting to make a move. They are a solid team with the two Tim’s and Sarah Prince, and I expect them to be very strong on the trek – they are playing the long strategic game which could start to pay dividends.”

Also in the pack on the Mohaka River are team isport and team Ataraxia Macpac.

” These teams will be off the river this afternoon and heading into the trek making the most of the day. They are pushing the edge here, trying to keep pace but not overcook themselves. Keeping the food intake up and your feet in good nick is vital as we are now into this race’s real adventure. No time to look back now.”

Clements Clearing at TA5 will become the definitive point for mid-pack teams today, with the first short course cut off at 4 pm.

” Some of those teams will be bitterly disappointed not to make it onto the full course, but they can all still carry on the shorter format and still experience this wilderness area of New Zealand that is truly like no other. It’s a mental and physical game from now on, and that’s all part of what adventure racing is.”